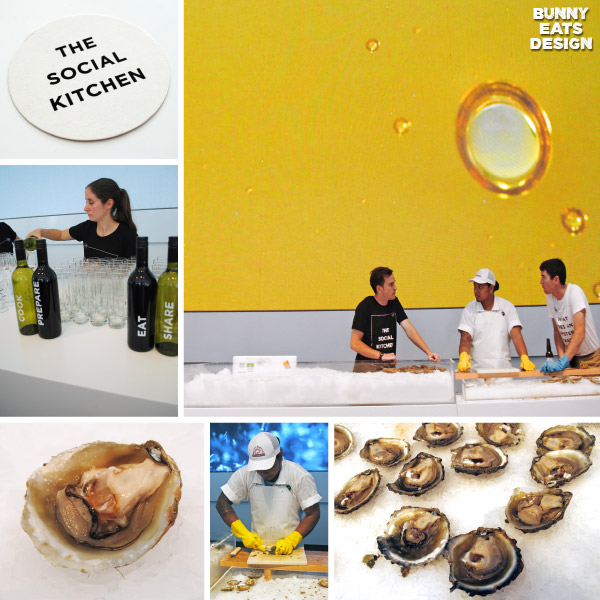 I had been looking forward to the Fisher & Paykel exhibit and this year’s The Social Kitchen did not disappoint. Last year, it was in a huge inflatable structure in Auckland’s Britomart Station area and this year’s reiteration at The Cloud on Auckland’s Queens Wharf was a great step up. The Cloud was the venue for many of the Rugby World Cup events including a special edition of Taste of New Zealand. You can read more about that event here.

Brilliant and light, The Social Kitchen at The Cloud is a 50m+ installation/exhibit/buffet line/kitchen line/processing plant while the rest of the room was made up of long tables and coloured stools to sit and enjoy the creations. To say this was an eagerly awaited, award winning exhibit isn’t an exaggeration. Last year’s Alt Group and Fisher & Paykel collaboration won a purple pin and a Gold Award at the Best Awards. Best is the considered the highest recognition for New Zealand designers and a very nice pat on the back after a job well done. You can view Alt Group’s Best Award submissions here.

We arrived at The Social Kitchen right on time at 10am and were one of the first through the door. Unfortunately, we had beaten the oysters which were still on their way up from Bluff which is right at the bottom of New Zealand. Fresh oysters much? Bluff oysters are prized for their strong oyster flavour. The common Pacific oyster that I’m used to is milder and creamier in comparison. I enjoyed the Bluffies, but they aren’t to everyone’s liking.

While awaiting our friends and the Bluffies to arrive, we busied ourselves by searing a morsel of beef (Angus rib eye) on a hotplate (rare for me please), topped with a marinated mushroom, caper aioli and fried onions. These were delicious. I’d like to know what the most popular complexion of doneness was. Is medium-rare still the winner? Or are people going even rarer these days? After cooking the delicious beef, there was a refrigeration display, followed by fancy snow cones (or a palette-cleansing sorbet) with happy dudes shaving ice from the the giant blocks of ice.

I’m not much of a sweet tooth, but the chocolate came very highly recommended and the spiel that came with it was interesting and informative. So much so that I’ve found myself repeating the same spiel to whoever will listen. It was super cool. A wooden veneer induction cooktop heated a square of chocolate so that it was almost liquid but still held it’s square shape. It only heats magnetised surfaces, so it doesn’t burn the wood. The chocolate became something you had to eat with a spoon. A biscuit spoon.

When I found myself back at The Social Kitchen at the end of the day (we did a full loop), I found a spread of oysters and no friends who really wanted to indulge. Without familiar accomplices, I devoured half a dozen more of Bluff’s finest with friendly oyster-loving strangers.

I’m one of those wine drinkers that will drink most wines, but the merlot they were serving was oh-em-gee-de-li-cious. I had to stop myself at 1 glass. Seeing it was still breakfast time and we had another dozen sites to visit, I think that was a wise move.

Everyone working at The Social Kitchen were so upbeat and chipper, it made me wish I worked there too. I guess that’s why they call it social and is a million miles away from Hell’s Kitchen.

Other foodie highlights included: Kohler Design Centre who paired up with Resene and Art Associates for a sugary sweet play land with a bathtub of M&M’s, candyfloss, pink frosted cupcakes and more; The Italian style house Spaziocaza proudly displayed a generous wheel of cheese and prosciutto. If any guys are reading this now, take note: Ladies love cheese.

All in all, we had a delicious day and a big thanks to all who delighted not only our eyes and our creative spirit, but also our tastebuds. I can’t wait for next year’s Designday.