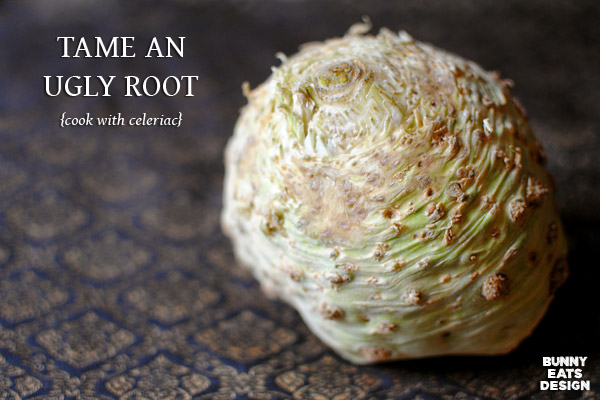 I always wondered what to do with the horrid looking vegetable known as celeriac. I remember seeing them at farmers markets before but never eaten it or tried to cook with it because it was so ugly. I put it on my winter to do list without thinking too hard about where I was going to get it from. As I was getting nearer to the end of winter and still no celeriac in sight, I put out a public plea to see if anyone knew where I could get my hands on one. Natz from my local Nosh came to the rescue celeriac was not only available, but on special that week. How’s that for luck?

The celeriac at Nosh were already trimmed and nowhere near the freaky the specimens I’d seen before. From the top, you could almost call it pretty.

Since we were having a roast, I decided to mash it since it sounded safe and easy. I carefully sliced off the skin and chopped it up, boiled it and The Koala mashed it with a little butter and milk.

The verdict? It was good and went well with our roast. It tasted a little like celery with the texture of a turnip. There was nothing exotic about it. I guess we expected something more wild. No need to be frightened at all.