Friends of snakes, look away now.

Killing and eating a snake was always going to be an interesting experience. I’d read about it online and I had a fair idea of what to expect. We talked to our hotel owner and receptionist about it and they called a taxi for us.

Unfortunately the taxi driver hadn’t been briefed and “Le Mat” which was the snake village didn’t seem to ring any bells. It was only after I drew and showed him a picture of snake while we gestured eating motions that he got it. “Ahhhh La Maaaat!”. All good.

He drove us to a restaurant and he communicated to us that he would wait outside while we ate. It’s quite normal in SE Asia countries for taxi drivers to wait outside for you. Something that is unheard of in New Zealand unless you’re using an ATM or something super quick. Taxis are very cheap in Vietnam and our return trip including the hour wait while we ate,  cost only 94,000VND / $6NZ / $4.50US.

I’d read about some horrible snake restaurants, animals downstairs in nasty conditions and the dining area upstairs. This was not one of those places. When we entered, we were offered a large snake. But it was 1 million VND / $64NZ / $48US which was more than what I had in mind. We settled for a slightly smaller snake for 700,000VND / $45NZ / $34US.

We were shown through a lovely restaurant to our table. It was all water features and bamboo bridges. Our snake was presented to us and The Koala with knife in hand was guided to where to cut to kill the snake. The blood was drained into a large cup and I got to shoot the raw heart with a little booze. It wasn’t beating and it was small so it went down easy. Apparently the raw heart can have aphrodisiac effects but to be perfectly honest, it’s probably all the vodka you drink with the meal.

Selecting a good snake. I don’t have a clue what we’re looking for. I guess one that looks mean. 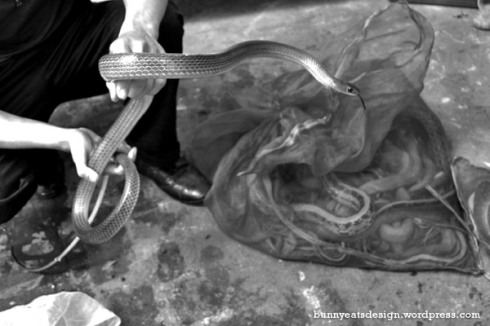 A bit apprehensive about killing a snake. 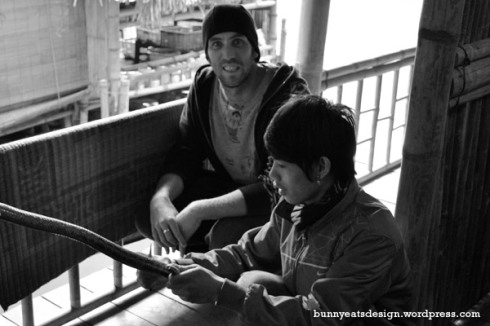 But then it’s all business. 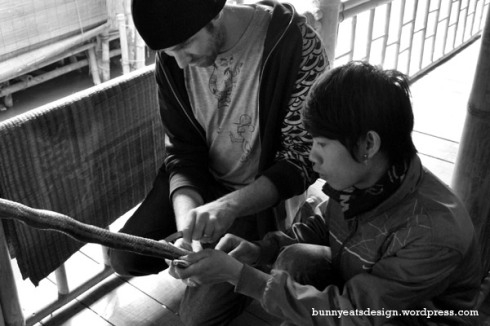 Draining the blood into a big glass. 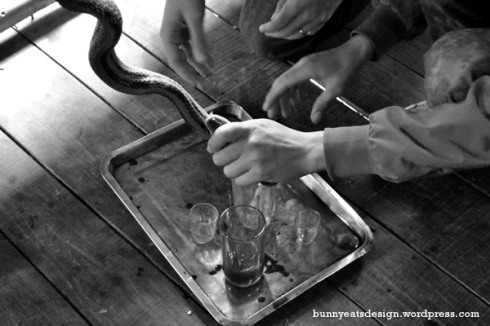 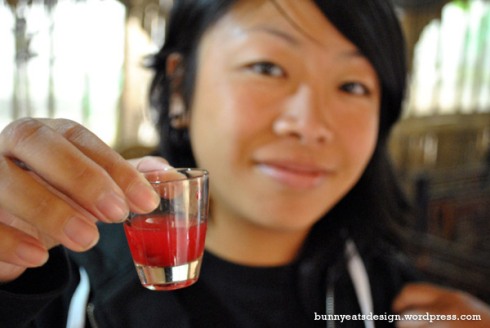 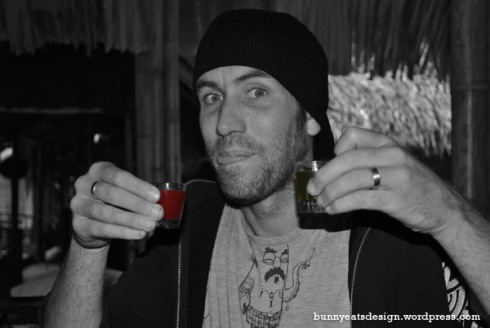 I don’t recommend bile shots. Once is enough. It tastes bitter and the green colour looks completely unnatural. 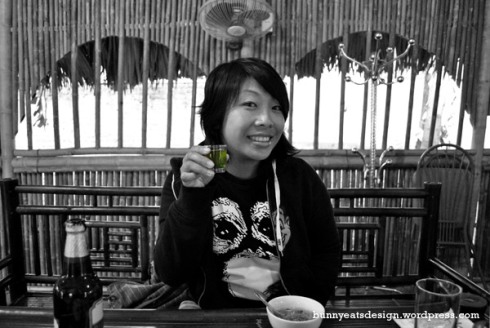 Hanoi Vodka 29.5%. It tastes like sake and the heart, blood and bile were all shot back with this, so it was quite the boozey lunch.

We were given extra blood in a big glass in case we wanted more shots. No extra bile though. I wonder if it’s due to the amount of bile a snake has or just because the bile is plain nasty and no one wants seconds.

We had a few voluntary shots of vodka and blood after our mandatory first taste. 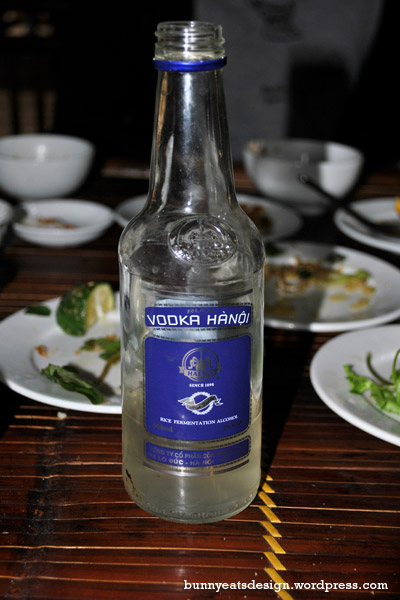 A yummy snake soup. Like an egg drop soup if you’ve had it, with a hint of fish flavour. There were plenty of dried mushrooms in there for extra flavour. We polished the soup off quick smart. 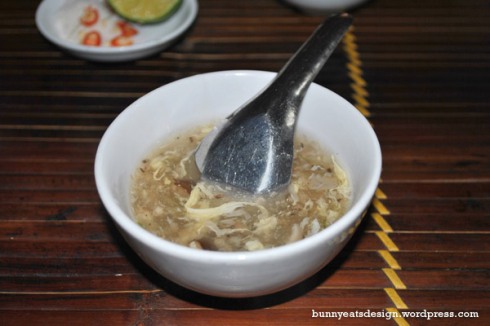 This dish was deep fried and gritty. Could have been finely minced and deep fried snake meat. It tasted fine but the texture was odd…like eating oily breadcrumbs. 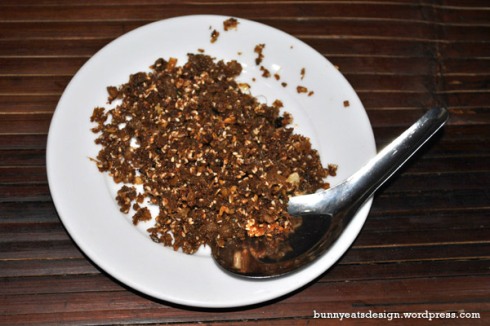 Snake steaks/fillets. A little chewy. Kind of like a chewy fish. This was The Koala’s favourite dish. 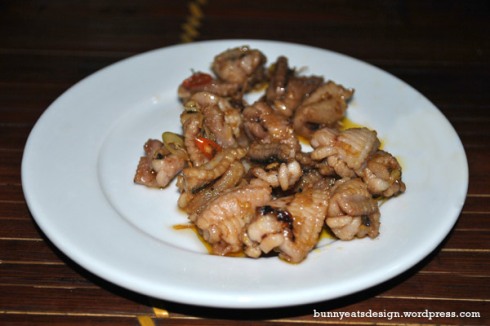 Some people like snake skin wallets, others have it quickly stir fried and served up as a snack.

The brown piece tasted like liver to me. Could be wrong…who knows? 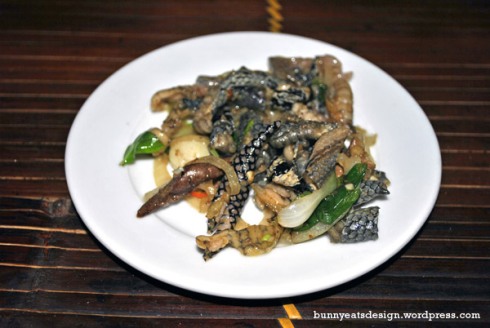 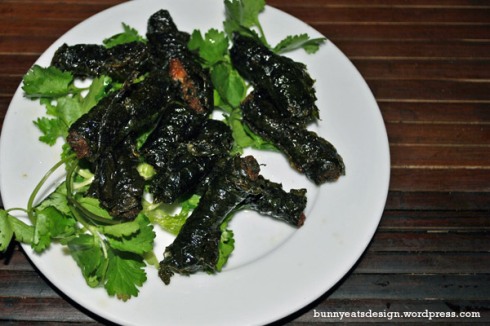 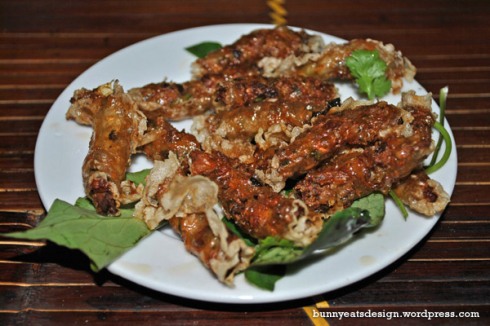 I call these snake saddles because they look like little saddles. 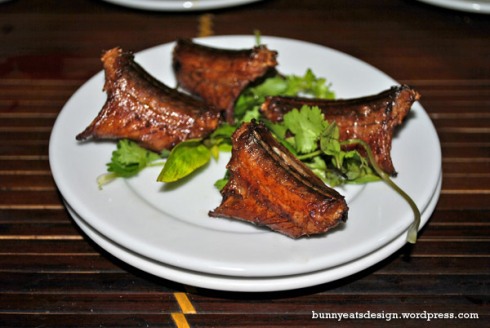 They tasted good, but they had heaps of bones and were hard to eat. I’m going to guess these were basted with sauce and baked. 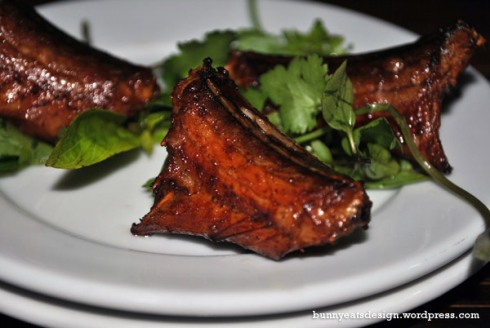 Second soup. This had beans in it and was kind of like a chowder due to it’s thick gloopy consistency. 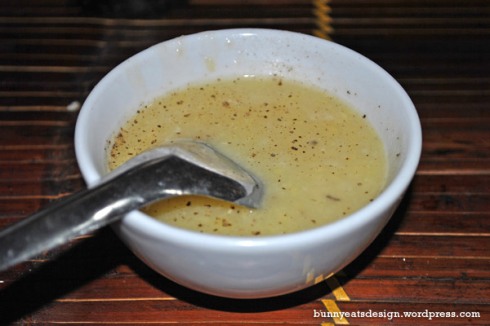 All up, it was an enjoyable experience. The restaurant was clean and the food done well.

Would I do it again? Only to tag along with a friend that wanted to eat snake for the first time, but the meat itself wasn’t more delicious than chicken, fish, or pork so it really is just a novelty.

When we got back to The Old Quarter, we stumbled upon Huong Mai Cafe which serves all sorts of coffee, but most important of all, it served weasel coffee. I prefer to call it cat poo coffee because the beans were originally gathered from civet cat poos. Civet cats eat only the best berries and poo out the beans the digestive process does some kind of voodoo magic to the beans and makes them taste great. I’ve read there are chemically treated beans to mirror the effect of the digestive enzymes too.

We went in and were served complimentary weasel coffee. The flavour is smooth and chocolatey with no bitterness or acid notes that coffee can sometimes have. I’m not a black coffee drinker but I can drink weasel coffee black. They were really, really good. So we bought packs for ourselves, our work places and our coffee loving friends.

Would I drink it again! Hell yes. Our own stash of weasel coffee was all drunk within a couple of weeks of coming home. 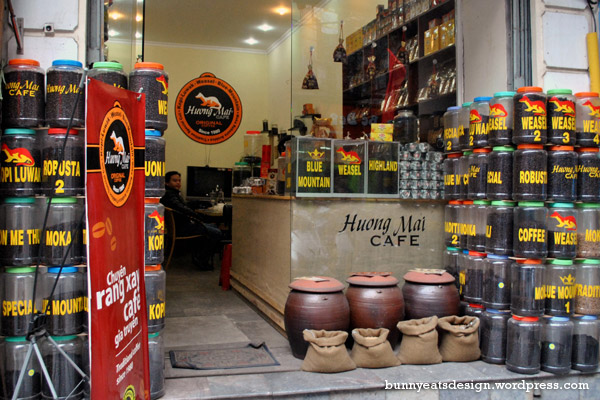 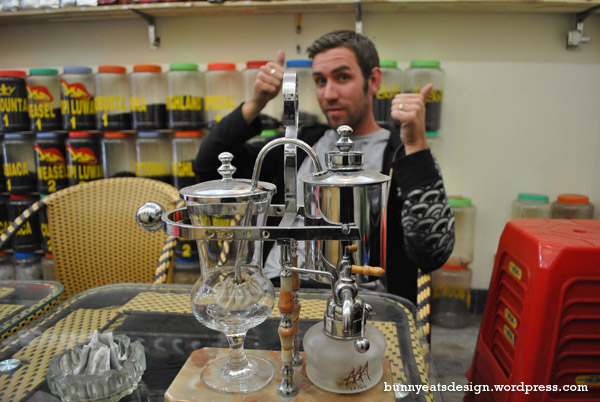 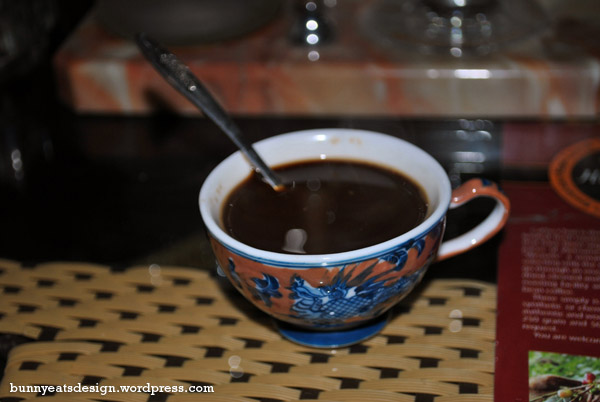 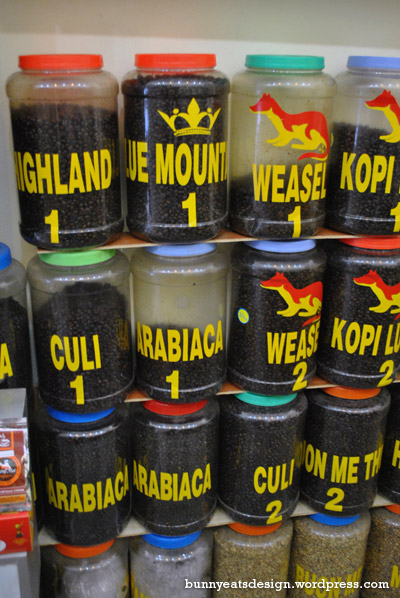