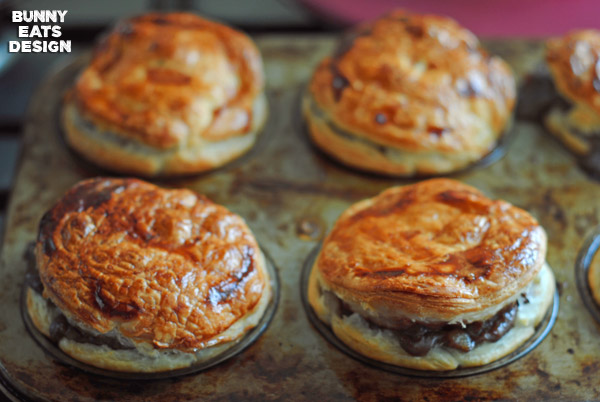 The Steak and Guinness Pies I made for St Paddy’s Day earlier this year.

I was once told by someone, that something I once said while eating struck a chord with her.

“Every now and then, a girl needs a pie.”

The cut off date for the Bakels NZ Supreme Pie Awards was yesterday and from now until July, pie makers all over the New Zealand will be perfecting their pies leading up to judging day on the 19th July. This excites me. If only I knew someone who needed a human guinea pig for their pie perfecting month. Last year, a fruit pie shocked the nation (ok, slight exageration) when it beat 4,400 entries and took the coveted top pie award. Fruit pies are ok, but I’m a meat pie kind of girl. Mince and cheese to be exact. New Zealand beef with a layer of melted cheese in a buttery puffy pastry case. Oh gawd.

Pies in New Zealand are a traditional food (borrowed from England) and eaten for breakfast by kids on their way to school, everyone for lunch and others for dinner with an optional side of mash potatoes and peas to fill out the meal. Usually in a single serve package, they are portable, cheap, tasty and filling. Some pies must be eaten with a knife and fork on a plate. Pies can be found in cafes and restaurants, school tuck shops, lunch bars, dairies (convenience store) and gas stations all across the country. The humble meat pie, like many humble dishes has been reinvented in many reiterations over the years.

Mince and cheese (ground beef, gravy and oozy, melty cheese) is my go-to pie and favourite pie across the country. But fancy fillings like “Chicken and mushroom pie with pesto and parmesan” are a welcome progression from the eternally popular beef pies. Gourmet pies that fetch prices of $6 or more compete in the same market as the dodgy $1 or $2 gas station variety.

Gas station pies are not recommended for anyone but the drunk or desperate. I spoke to a rep from one of the best pie brands sold at gas stations not long ago. He said despite recommendations to their resellers that pies be purchased or discarded after a certain number of hours, pies continue to sit in the warmer until they are sold. It’s not the pie’s fault it’s been sitting there since the beginning of time, gravy blackened and viscera fossilising in the dry heat. If you have ever had a gas station pie, you know what I mean.

Perhaps the most well known gas station pie is the one that Sergeant Guy Baldwin catapulted to fame on the TV series Police Ten 7. This South Park fan-made clip features the original audio but the visuals have been altered. Just a little.

Always blow on the pie. Safer Communities Together.

I have made pies several times with terrific results, but to be honest, it’s a lot of effort involved when it’s just as easy and about the same cost to buy a good pie from the shop. What is your go-to pie? What pies would you make at home?